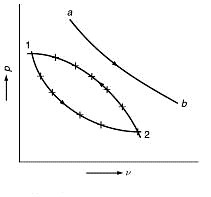 State Diagram
This is a diagram on Cartesian coordinates with any two independent properties being represented on x and y axes. This diagram represents the state of a system at different instants.

State Point
This is a point on a state diagram showing the condition of a system at a given instant, in terms of two independent properties selected on x and y axes.

Change Of State
In any operation in which one or more of the properties of a system changes is called a change of state.

Path
A path is a line joining successive state points on a state diagram during change of state.

Process
The transformation of a system from one state to another is called a process i.e. one or more properties of a system changes. For example a change in state occurs from state-1 to state-2 as represented in figure.

Cycle or Cyclic Process
When a system in a given state goes through a number of different processes and finally returns to its initial state, the system is said to have undergone a cycle or cyclic process. The properties of the system may vary during the cycle but at the end all properties must be restored to the initial values.

Non-Cyclic Process
A system is said to have executed a non-cyclic process if its initial and final state points are not the same.