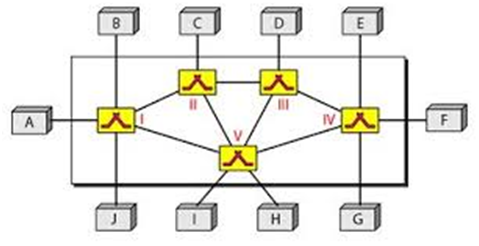 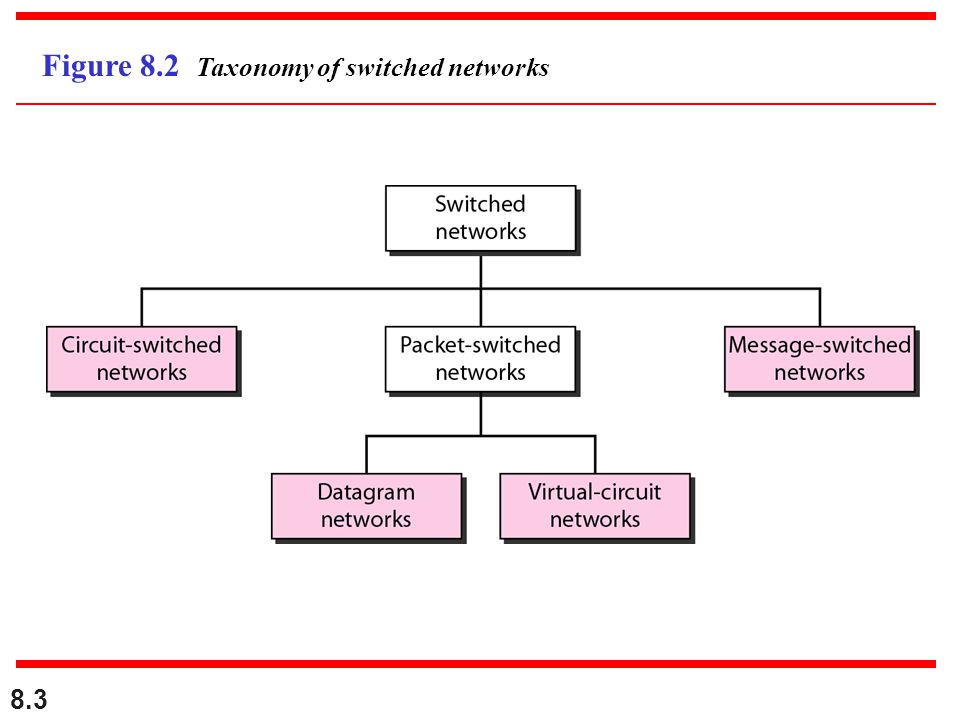 A simple circuit-switched network with four switches and four links is shown in Figure 3. Using FDM or TDM, each link is separated into n (n is 3 in the illustration) channels. 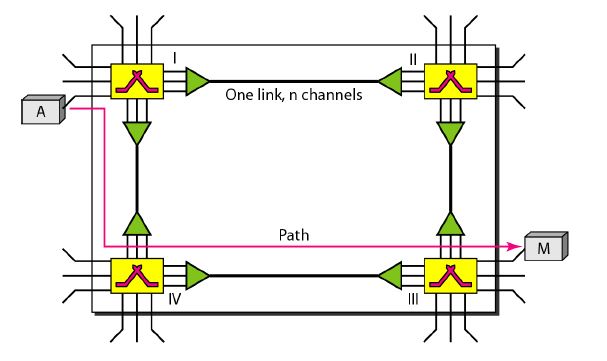 A switch is directly connected to the end systems, such as computers or telephones. When end system A needs to communicate with end system M, system A must initiate a connection request to M, which must be approved by all switches as well as M. The setup phase is when a circuit (channel) is reserved on each connection, and the dedicated way is defined by the combination of circuits or channels. Data transfer can begin after the specialized path of connected circuits (channels) has been created. The circuits are tom down once all of the data has been transferred.

Several points must be emphasized here:

There are three stages to the process:

Phase of Data Transfer
The two parties can transfer data after establishing a dedicated circuit (channels).

Phase of Tear down
A signal is delivered to each switch to free the resources when one of the parties needs to disconnect.

Efficiency
Circuit-switched networks, it may be argued, are less efficient than the other two types of networks since resources are distributed throughout the duration of the connection. Other connections cannot access these resources. When using a telephone network, people usually end the call when they are finished with their conversation. In computer networks, however, a computer can connect to another computer even if it has been idle for a long period.

Delay
Although a circuit-switched network is typically inefficient, the latency is negligible in this form of network. The data is not delayed at each switch during data transfer; the resources are allocated for the lifetime of the connection. Figure 6 illustrates the concept of delay in a circuit-switched network with only two switches.There is no waiting time at each switch, as seen in Figure 6. The overall delay is related to the time it takes to join the circuit, transfer data, and disconnect it. 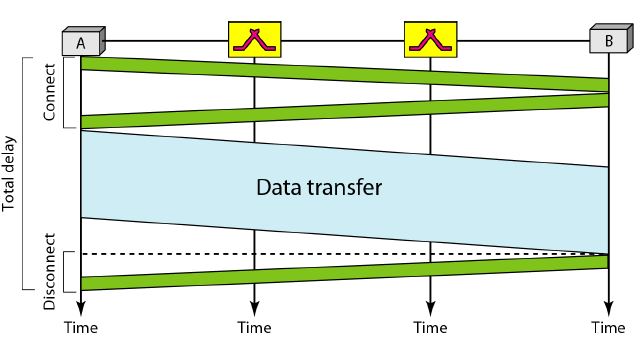 How are packets routed to their destinations in a datagram network if there are no setup or teardown phases? Each switch (or packet switch) in this form of network has a routing table that is based on the destination address. The routing tables are dynamic and updated on a regular basis. The tables keep track of the destination addresses and the forwarding output ports that relate to them. This differs from the table of a circuit-switched network, where each item is added during the setup process and discarded after the breakdown phase. A switch's routing table is shown in Figure 8. 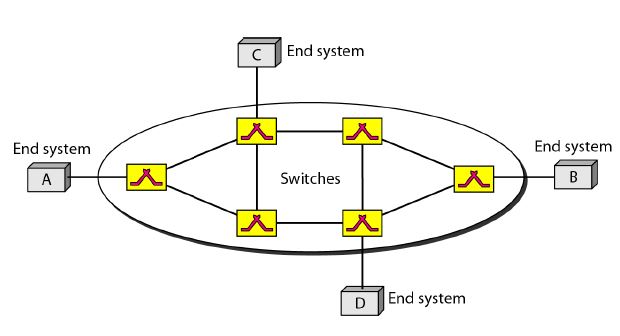 A virtual-circuit network combines the advantages of both circuit-switched and datagram networks. It possesses some of the traits of both.

​​​​​​​A virtual-circuit network is depicted in Figure 10. Switches in the network allow traffic to flow from sources to destinations. A

Global Addressing
A source or a destination must have a global address, which might be unique within the network's scope or globally if the network is part of an international network.

Virtual-Circuit Identifier
The virtual-circuit identifier is the identifier that is actually utilized for data transfer. In contrast to a global address, this is a tiny number with only switch scope; it is used by a frame between two switches. A frame has a VCI when it arrives at a switch and a different VCl when it leaves. The VCI in a data frame changes from one switch to the next, as seen in Figure 11.

Phase of Data Transfer
All switches must have a table entry for this virtual circuit in order to move a frame from a source to its destination. Figure 12 demonstrates how a frame from source A reaches destination B and how its VCI changes during the voyage. The VCI is changed and the frame is routed by each switch. 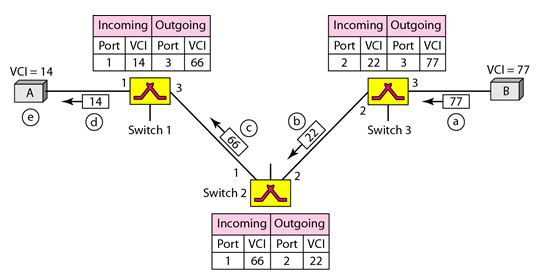 Setup Phase
A switch creates an entry for a virtual circuit during the setup process. Assume that source A requires the creation of a virtual circuit to B. The setup request and the acknowledgement are both essential.

Request for Setup
The source sends a setup request frame to the destination. The procedure is depicted in Figure 14. 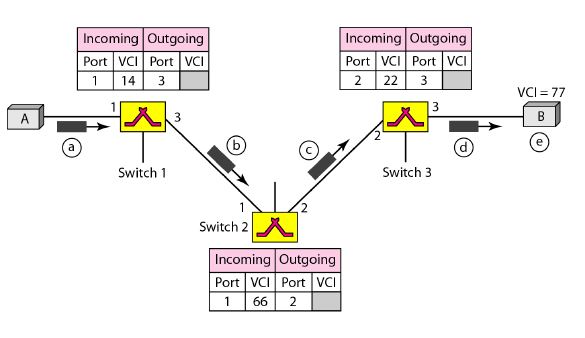 Phase of Teardown
After transmitting all frames to B, source A sends a special frame known as a teardown request. Destination B responds with a confirmation frame for disassembly. The relevant entry in each switch's table is deleted.

Efficiency
As previously stated, in a virtual-circuit network, resource reservations can be made during setup or on demand during the data transfer phase. In the first scenario, each packet experiences the same delay; in the second situation, each packet may have various delays. 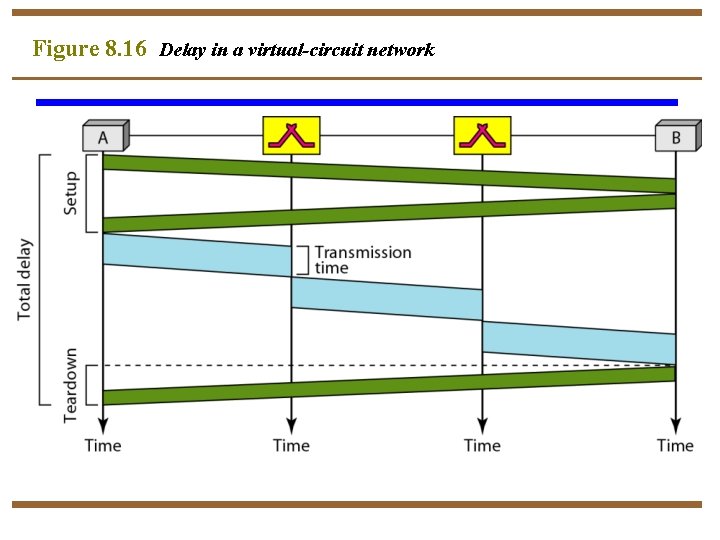 Figure 16 :Delay in a virtual-circuit network

There is a one-time setup delay and a one-time teardown delay in a virtual-circuit network. Individual packets do not have to wait if resources are allocated during the setup phase. The delay for a packet going between two switches in a virtual-circuit network is shown in Figure 16.
The packet passes through two switches on its way to its destination (routers). Three transmission periods (3T), three propagation times (3't), data transfer shown by sloping lines, a setup delay (which includes transmission and propagation in both directions), and a takedown delay are all shown (which includes transmission and propagation in one direction).
In each switch, we ignore the processing time. The entire amount of time spent waiting is
3T+ 3't + setup delay + teardown delay = total delay

The delivery, accuracy, timeliness, and jitter properties of a data communications system determine its effectiveness.