A wide variety of time-current characteristics is available for over-current relays.

​​​​​​​It operates after a predetermined (definite) time when the current exceeds its pick-up value. Thus it has a time setting adjustment to set the desired definite operating time and a pick up adjustment in the relaying unit. Curve (a) of figure 2.2 shows the time-current characteristic for this type of relay.

​​​​​​​Instantaneous means ‘no intentional time delay’. It operates in 0.1 second or less. Sometimes the term like “High Set” or “High Speed” is used for very fast relays having operating times less than 0.1 second i.e. in a few milliseconds. Such a relay has only the pick up setting and does not have any time setting. The construction and the characteristics of an instantaneous attracted armature type relay is shown in figure 2.3, wherein it can be seen that as the armature of the relay gets attracted towards the coil, the air gap becomes smaller and hence the reluctance becomes smaller. This results in increased flux which causes the force on the armature to build up (force being proportional to the square of the flux density). The operating torque on the armature is proportional to the square of the current. 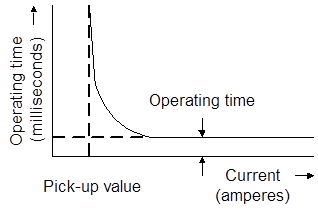 ​​​​​​​Inverse time characteristic fits in very well, with the requirement that the more severe a fault is, the faster it should be cleared to avoid damage to the apparatus. This type of characteristic is naturally obtained from an electromechanical relay & with the advent of microprocessor based relays; it is possible to generate any imaginable time-current characteristic. The operating time decreases as the current increases as shown in curve (b) of figure 2.2.

These types of relays are recommended for the cases where there is a substantial reduction of fault current as the distance from the power source increases. They are particularly effective with ground faults because of their steep characteristics.

It is very suitable for the protection of machines like alternators, power transformers, earthing transformers, expensive cables, railways trolley wires etc against overheating. A relay should not operate on momentary overloads. But it must operate on sustained short circuit current where the IDMT relay fails. This relay is used for the protection of alternators against overloads and internal faults. It is also used for reclosing distribution circuits after a long outage. After long outages, when the circuit breaker is reclosed there is a heavy inrush current which is comparable to a fault current. It is able to distinguish between fault current and inrush current due to its steep characteristic which the IDMT relay is not. Hence, an IDMT relay trips again after reclosing. Therefore an extremely inverse relay is quite suitable for the load restoration purpose. The mathematical relation between the current and the operating time can be written as – 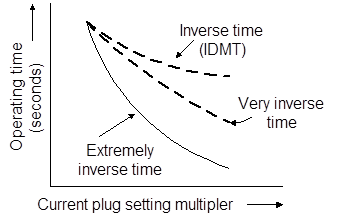