The construction of the Megger is shown in the figure below. The Megger has one current coil and the two voltage coils V1 and V2. The voltage coil V1 is passed over the magnet connected to the generator. When the pointer of the PMMC instrument deflects towards infinity, it means that the voltage coil remains in the weak magnetic field and thus experiences very little torque. 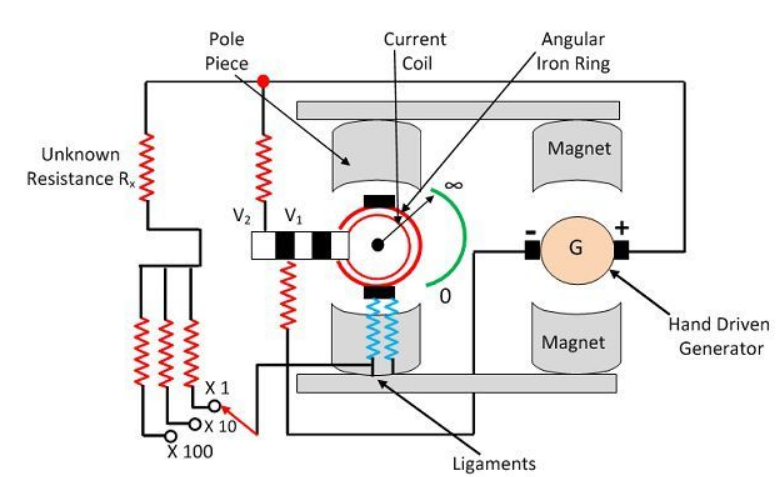 The torque experienced by the coil increases when it moves inside the strong magnetic field. The coil experiences the maximum torque under the pole faces and the pointer set at the zero end of the resistance scale.For improving the torque, the voltage coil V2 is used. The coil V2 is so allocated that when the pointer deflects from infinity to zero the coil moves into a stronger magnetic field.

In Megger, the combined action of both the voltage coils V1 and V2 are considered. The coil comprises a spring of variable stiffness. It is stiff near the zero end of the coil and becomes very weak near the infinity end of the spring.The spring compresses the low resistance portion and opens the high resistance of the spring, which is the great advantage of the Megger because it is used for measuring the insulation of the resistance which is usually very high.The instrument has voltage selector switch which is used for selecting the voltage range of the instrument. The voltage range is controlled by selecting the varying resistance R connected in series with the current coil. The voltage is generated by connecting the hand driven generator.

The testing voltage is usually 500, 1000 or 2500 V which is generated by the hand driven generator. The generator has a centrifugal clutch due to which the generator supplied the constant for the insulation test. The constant voltage is used for testing the insulation having low resistance.The Megger has three coils, two pressure coils and one current coil. The pressure coil rotates the moving coil in the anticlockwise direction, whereas the current coil rotates it in the clockwise direction.When the unknown resistance is connected in the circuit, the pointer of the moving coil becomes stable. The pressure coil and the current coil balance the pointer and set it in the middle of the scale.The deflection of the pointer is directly proportional to the voltage applied to the external circuit. When the testing circuit is applied across the Megger, and if there is no shorting throughout the insulation then the pointer deflects towards the infinity.  Which shows that the resistance has high insulation.  For low resistance, the pointer moves towards zero.

Before providing the earthing to the equipment, it is essential to determine the resistance of that particular area from where the earthen pit can be dug. The earth should have low resistance so that the fault current easily passes to the earth. The resistance of the earth is determined by the help of earth tester instrument. 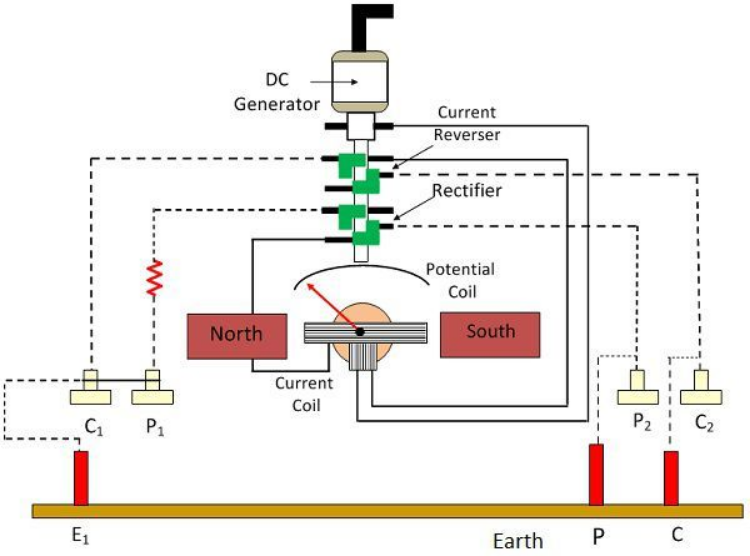 The tester has two commutators place along with the current reverser and rectifier. The each commutator consist four fixed brushes. The commutator is a device used for converting the direction of flows of current. It is connected in series with the armature of the generator. And the brushes are used for transferring the power from the stationary parts to the moving parts of the devices.