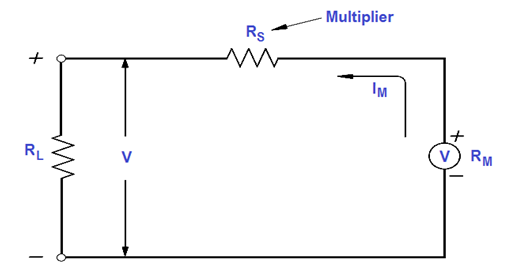 Errors in Voltmeters and Ammeters

Construction:
The instrument has a moving coil of circular or rectangular wire, with the N turns suspended in the uniform, horizontal and radial magnetic field of a permanent magnet in the shape of a horse shoe. It is free to rotate about its vertical axis. The coil which is place around an iron core, which is spherical if the coil is circular, and if cylindrical if the coil is rectangular. since the coil is moving and the magnet is permanent, the instrument is called PMMC instrument.

Working:
When the current is passed through the coil it produces another magnetic field. So the interaction of this filed with the magnetic field of the Permanent Magnet produced an electromagnetic torque. The amount of force experienced by the coil is proportional to the current passing through the coil. This again becomes proportional to the measured quantity that is voltage or current. This electromagnetic torque is counter balanced by the mechanical torque of control springs attracted to the movable coil. The coil is wound on an aluminum former which moves in the magnetic field of the permanent magnet to provide eddy current damping. When the torque is balanced, the pointer attached to the moving coil will stop and its angular deflection will represent the amount of electrical current to be measured against a fixed reference or scale. The pointer deflection id proportional to the current passing through the coil.
The deflection torque is given by, Td = NBIA

N=Numbers of turns in the coil

I=Current flowing through the coil

This torque will cause the coil to rotate until an equilibrium position is reached at an angle θ with its original orientation.

The brief description of different components of a moving-iron instrument is given below:

In repulsion type, a fixed vane or rod is also used and magnetized with the same polarity. Control torque is provided by spring or weight (gravity).

Damping torque is normally pneumatic, the damping device consisting of an air chamber and a moving vane attached to the instrument spindle.

Deflecting torque produces a movement on an aluminum pointer over a graduated scale.

The deflecting torque in any moving-iron instrument is due to forces on a small piece of magnetically ‘soft’ iron that is magnetized by a coil carrying the operating current. In repulsion type moving–iron instrument consists of two cylindrical soft iron vanes mounted within a fixed current-carrying coil. 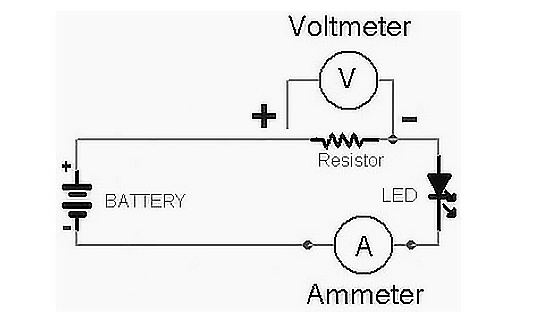 Current in the coil induces both vanes to become magnetized and repulsion between the similarly magnetized vanes produces a proportional rotation. The deflecting torque is proportional to the square of the current in the coil, making the instrument reading a true ‘RMS’ quantity Rotation is opposed by a hairspring that produces the restoring torque. Only the fixed coil carries load current, and it is constructed so as to withstand high transient current.

Moving iron instruments have scales that are nonlinear and somewhat crowded in the lower range of calibration. 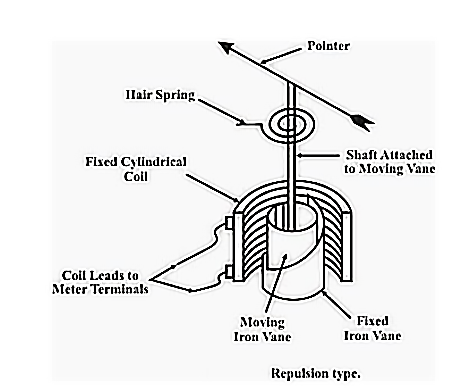 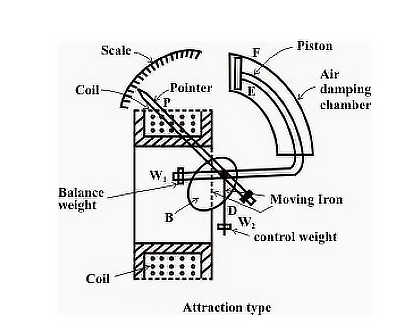 Measurement of Electric Voltage and Current

Moving iron instruments are used as Voltmeter and Ammeter only.

Both can work on AC as well as on DC.

An electrodynamometer type device is a transmission tool. The transfer tool is limited by d.c. source and used without any changes to a.c. ratings. Such a transfer tool has the same accuracy as a.c. and d.c. ratings. Electrodynamometer-type instruments are often used in accurate a.c. voltmeters and ammeters, not only at power line frequencies but also at low sound frequency frequencies. With some small adjustment, it can be used as a wattmeter for power measurements.

Why PMMC tools cannot be used for a.c. ratings? 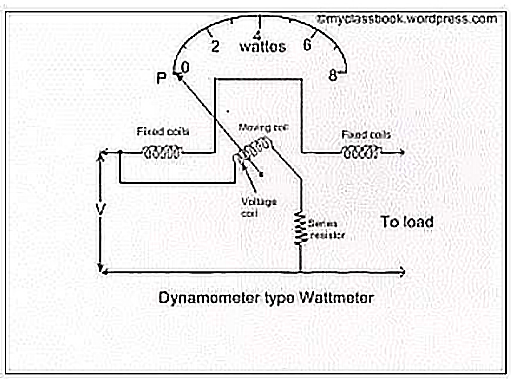 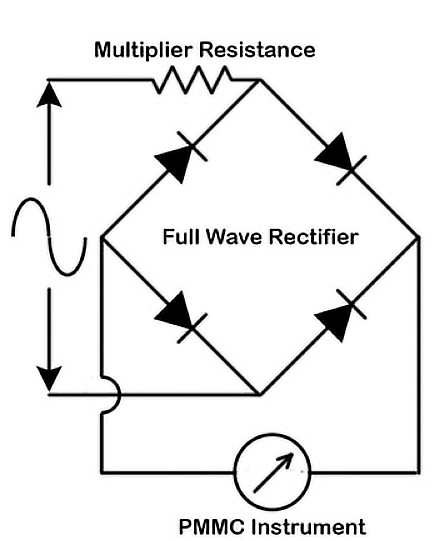 It measures the alternating electric signal using the D.C. measurement tool. As the name implies, this Instrument  first adjusts the A.C signal to D.C. and then scales. Although it measures the adjusted A.C signal (D.C signal), but the metal scale is limited to A.C. The sensitivity of D ’Arsonval instrument is very high. But the D’Arsonval Instrument can only be measured in D.C. Thus, to use the A.C.’s D’Arsonval movement sensitivity, we use a Rectifier type Instrument.

The sensitivity of the repair kits is high compared to the moving coil and the Electro dynamo meter steel. Thus, it is used to measure current strength and voltage. Arrangement of the repair metal circuit shown in the figure below. The device uses four diodes that act as a correction element.